Sunshine Cake for my Birthday

My mother used to make Sunshine Cake for my birthday every year, per my request!
~~~~~
It is an Angel Food Cake and very nice as a light dessert. It would be very good served with fruit and ice cream!

Add sugar to the 4 egg yolks in a mixer and beat for 7 minutes.

Sift the flour and baking powder together. Then add the flour mixture to the bowl alternately with the hot water. Set aside.

In a separate bowl, beat the 4 egg whites and the cream of tartar until stiff peaks form.

Fold in the egg white mixture to the flour/egg yolk mixture.

Bake at 325 degrees for 60 - 75 minutes. Invert cake pan while it cools. Top with powdered sugar. 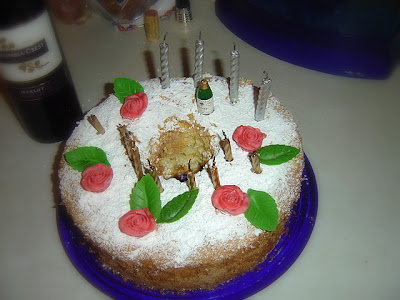 Posted by sammawow at 7:34 PM 1 comments

This morning I was asked if I would like a fine birthday breakfast to be made for me.
It would be eggs, sausage (boca) and waffles.
I am not that hungry first thing in the morning so he made it for himself! 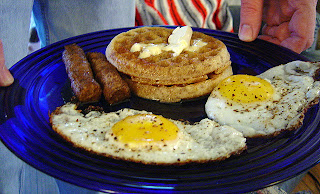 Willow wanted breakfast too but she preferred her crunchies.
And she wants them now!!!!! 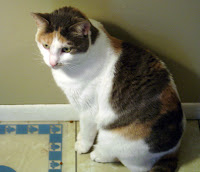 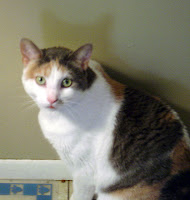 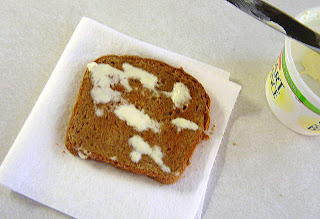 Friday Ark boarded yesterday,
Kate in the Kitchen is hosting Weekend Cat Blogging,
and the 149th edition of the Carnival of Cats is at Mind of Mog.
So, it's time to visit all those cats!

We went to our favorite winery last weekend after the ice storm.
Here is a picture of the tree at the entrance... 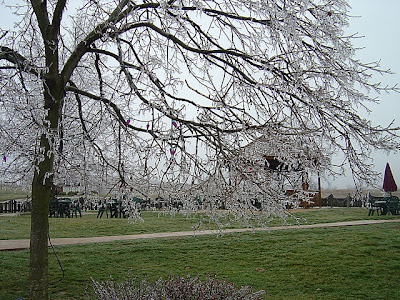 And here are my guest kitties,
Phantom (as in "of the Opera")
and her daughter CC (as in "Curtain Call") 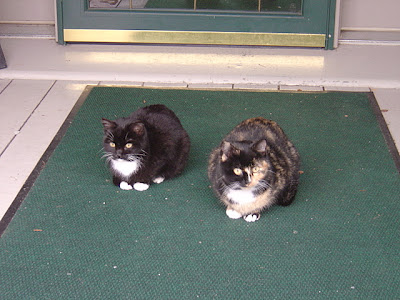 And more pictures of CC from earlier in the month. 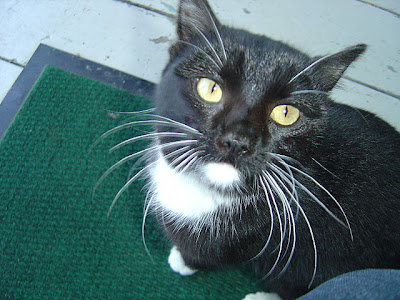 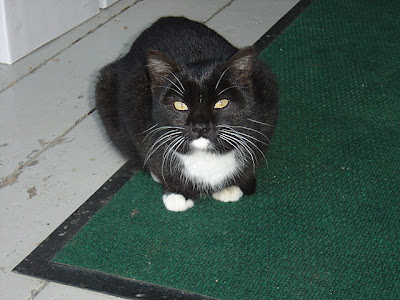 Don't forget to visit all the other cats:
~~~~~
Friday Ark boarded yesterday,
Cat Blogosphere is hosting Weekend Cat Blogging,
and Carnival of Cats is at Enrevanche

Posted by sammawow at 2:25 PM 9 comments

Previously I found the "Best to Worst" List of drivers re: astrological signs according to InsuranceHotline.com. Interestingly enough, I just found another one.
Here's the surprise - the list done by Allstate Insurance was totally different
than the other one.
The Allstate Study was analyzed by Carol Allen, Vedic Astrologer.
(I don't actually know what a "vedic" astrologer is???)
The article was written by Hilary Kramer and was also found on AOL, as was the first list.
It was stated in her article that there are quite contradictory results in many of these studies.
~~~~~
I like this one better as it shows Aquarius as #10 as opposed to the other one where I was listed as #11. Eventually I will find a list that says that Aquarius is the best driver! I was also interested to note that Aries (both my husband and son-in-law are Aries), which placed 10th before, has now become #1 as the best driver. So they will both like this list better also!
~~~~~
Best - Aries: Rams tend to be in a rush to get to every destination but are great drivers because they take care of themselves and stay out of trouble. 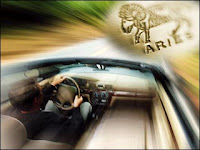 No. 2 - Cancer: Crabs prefer a minivan to a Maserati, with space for everyone from grandma to the many lost dogs and homeless people they may find. 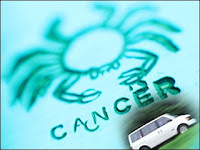 No. 3 - Taurus: Bulls drive the nicest, most luxurious cars and can be found travelling along the scenic route, listening to their state-of-the-art sound system. 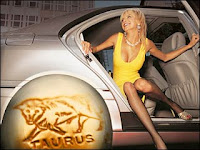 No. 4 - Gemini: These natural multitaskers can be found behind the wheel of a car while simultaneously checking their palms, on their cell phones and shaving. 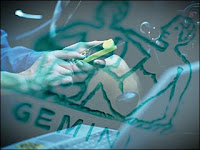 No. 5 - Sagittarius: These adventurous souls can be found happily zipping along in a luxury business sedan on their way to a power luncheon or corporate takeover. 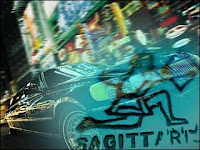 No. 6 - Capricorn: These punctual, fastidious drivers can be recognized for their perfect road etiquette (i.e. driving exactly the speed limit) or lecturing those who lack it.

No. 7 - Pisces: Most likely to pick up a hitchhiker or be a hitchhiker. However, these water lovers usually travel by boat -- or astral projection. 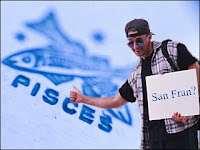 No. 8 - Scorpio: If they must leave home, they prefer to take the secret way to a destination, in a vehicle with tinted windows and unmarked plates. 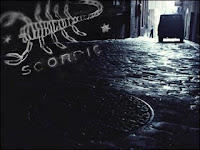 No. 9 - Libra: Most likely to apply makeup when driving, which perhaps is why they're also most likely found getting phone numbers of other drivers at red lights. 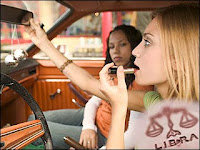 No. 10 - Aquarius: These are the drivers most likely to have electric cars or those powered by potato juice and believe driving studies are a scam to raise premiums. 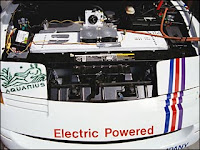 No. 11 - Leo: Leos are the most likely to not be driving at all, as it is beneath their dignity. They prefer to employ a chauffeur -- or better yet, have others come to them. 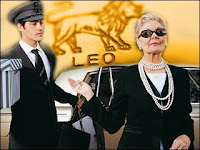 No. 12 - Virgo: These persnickety drivers can be observed tooling around town in their spotless, hand-waxed, air-freshened vehicles. 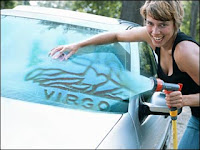 Posted by sammawow at 6:27 AM 1 comments

My mother gave me a beautiful and cozy white robe for Christmas. 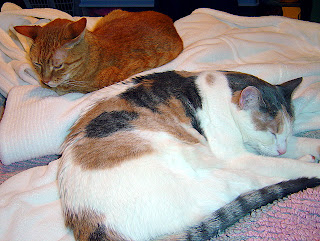 But once the cats discovered the coziness of it, 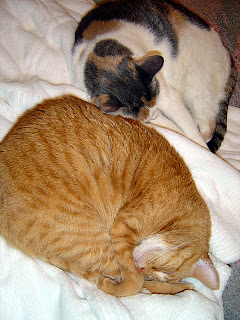 they claimed it!
~~~~~
In 2007, they are going to learn to share!
~~~~~
Friday Ark is boarding today,
What Did You Eat? is hosting Weekend Cat Blogging,
and Carnival of Cats is at Pet's Garden Blog.
So, it's time to visit all those cats!

Posted by sammawow at 4:15 PM 3 comments

I absolutely love butternut squash.
So when I found this recipe, I knew that I had to make it
and that I would love it! I was so right about this recipe.
I found the recipe in Southern Living magazine and, of course, tweaked it a bit.
~~~~~
Cook beef, bell pepper, onion and garlic in a Dutch oven over medium heat until meat crumbles and is no longer pink. Drain well and return to pot.

Stir in tomatoes and the next five ingredients; bring to a boil over medium-high heat. Cover, reduce heat to medium-low, and simmer, stirring occasionally, 15 minutes. Stir in corn, and cook, uncovered, 15 minutes or until squash is tender and chili it thickened.

Posted by sammawow at 6:46 PM 0 comments

I found this link when visiting Leslie's Omnibus
for Carnival of the Cats.
Her Divine Miss Marilyn found her Peculiar Aristocratic Title
so I wanted to find what Sammawow would turn out to be.
~~~~~
And here it is...

I wasn't sure if I really liked this name as Sammawow
so I tried again as Samantha, which of course was her real name!

Posted by sammawow at 9:02 PM 2 comments

They are partnering with target animal welfare and community organizations around the country. "It will be a focused effort to create a country of humane communities, one community at a time, where animals receive the compassion and respect due to them as sentient beings, and where there is no more unnecessary euthanasia of adoptable animals simply because of a lack of resources or awareness."
~~~~~
The ASPCA President & CEO is Ed Sayres.

He implemented a model of his plan in San Francisco.
After it was successful there, he brought it to New York City.
For 2007, the partner communities will be Austin, Texas;
Gulfport-Biloxi, Mississippi; Philadelphia, Pennsylvania
and Tampa, Florida.
~~~~~
Here is the FAQ for ASPCA's Mission: Orange.
~~~~~
The ASPCA will even send you this free sticker to alert rescue people
that there are animals inside your house in the event of an emergency.

For the official launch today,
here are China Cat and Willow

in and with orange boxes! 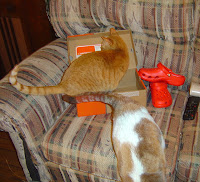 Posted by sammawow at 9:12 AM 1 comments

My mother loves chocolate and raspberry
so I made these when my parents came to visit for Christmas. 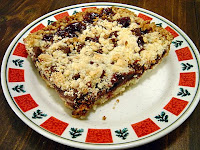 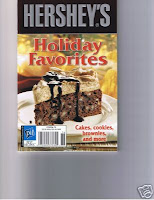 Posted by sammawow at 7:47 PM 1 comments

Posted by sammawow at 3:21 PM 1 comments

As usual, whenever I'm looking for something online I invariably find something else of interest. This is what I found today. It was an article dated December 13th from Toronto (Reuters Life!) regarding car accidents and astrological signs called Drivers by Sign.
~~~~~
A study was done by InsuranceHotline.com which looked at
100,000 North American drivers' records for the past six years.
They found certain astrological signs were more likely
to get ticketed and have accidents.
~~~~~
Not surprising to my friends and family,
in the Best to Worst list, Aquarius is second to last!
~~~~~
Best to Worst
~~~~~

Posted by sammawow at 7:01 AM 1 comments 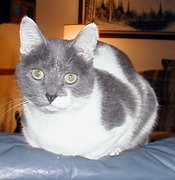 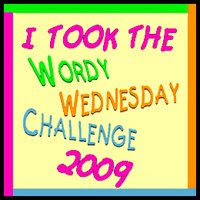